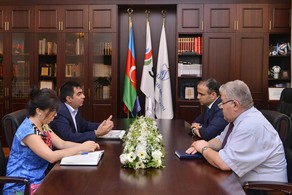 It was told in the press service of BHOS, during the meeting Rector Gasimov informed the guest aboutthe finalizing phase in the construction of the new campus of the school. He also discussed with Mr. Gasimov the activities implemented at the Training Centre created at the campus and fully supplied with ABB equipment and simulation tools. The Rector emphasized that the center would put under operation before the opening of the campus.

ABB Country Manager Rustam Gasimov on behalf of the company he represents expressed his pleasure of collaborating with BHOSand strong belief that this partnership would further expand in future. He also underlined that the Training Center would provide opportunities for faculty and students to organize various trainings and be engaged in research using ABB technologies. Mr. Gasimov said that ABB would hold its trainings for the regional experts in that Training Centre.

The other aspects and perspectives of further collaboration of mutual interest were also discussed during the meeting.