Khojaly tragedy was commemorated at BSU 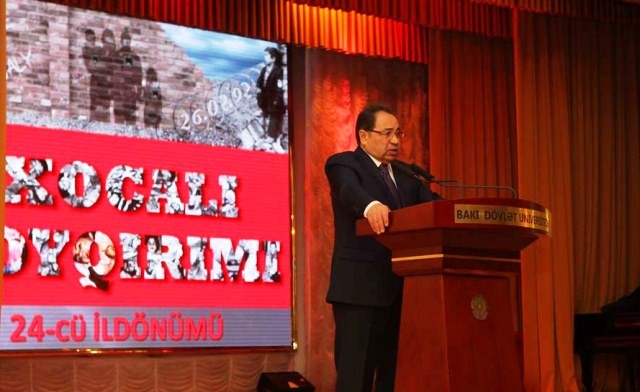 Baku State University hosted an event dedicated to the 24th anniversary of the Khojaly genocide.

The event began with a view of the exhibition themed paintings on display in the foyer of the university, and was continued in the assembly hall of the university. The participants observed a minute of silence to pay tribute to victims of the massacre.

The rector, academician Abel Maharramov spoke about the Khojaly genocide. He noted that on the night of 25 to 26 February 1992, Armenian armed forces with the help of the 366th Motor Rifle Regiment of the USSR completely destroyed the town of Khojaly. During the massacre 613 Azerbaijanis were brutally murdered, more than 1,200 were taken prisoner and hostage thousands injured. Then citizen of Ukraine Leonid Kravets shared his memories.

He was the pilot of the helicopter, which landed just in the place next day after the Khojaly tragedy to make footage.

“I have never seen such a merciless crime against humanity. They brutally killed women and children.It was a terrible scene.The helicopter landed.And the corpses of children on the ground.We were shocked.The next day, the footage shown on TV.Death of a soldier in the war is natural.But such a brutal murder of civilians was a meanness. Armenians began to shoot us, because they knew that they had made and did not want this became known the world community", said the Ukrainian pilot Leonid Kravets.

At the end of the event, students made an appeal to the international community.