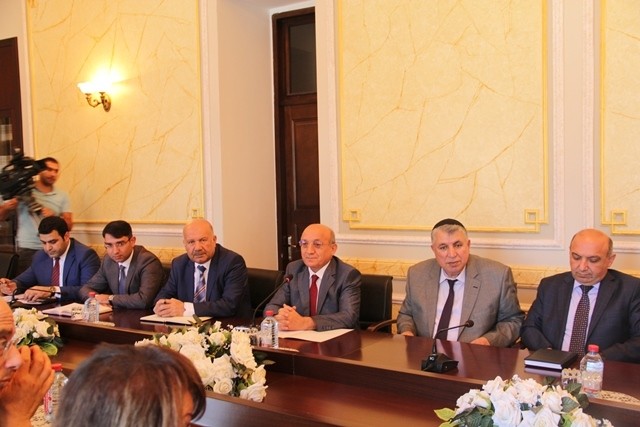 Chairman of the Azerbaijani State Committee for Work with Religious Organizations Mubariz Gurbanli on Friday received representatives of the Jewish community of France as well as the founder of the France-based Valiske Association, André Kosmicki, professor of Sorbon University Arianne Bendavidi, and other Jewish intellectuals and businessmen well known in France.

Gurbanli noted that the multicultural and tolerant atmosphere in Azerbaijan dates back to ancient times. He also spoke about activities of the Jewish community in Azerbaijan.

The committee chairman added that one of the essential elements of tolerance in Azerbaijan is that it is under state protection.

André Kosmicki, for his part, said that multiculturalism and tolerance prevail in live in harmony and with mutual respect in the country.

“It is no coincidence that President Ilham Aliyev announced 2016 the year of multiculturalism”, he added.

At the meeting, the sides exchanged views on the Azerbaijani people’s values of multiculturalism and tolerance, and the attention and care shown to the Jewish community. Besides, the issue of cooperation with the Jewish community in France was discussed as well.

Kosmicki was presented with a book of photos of religious monuments in Azerbaijan.