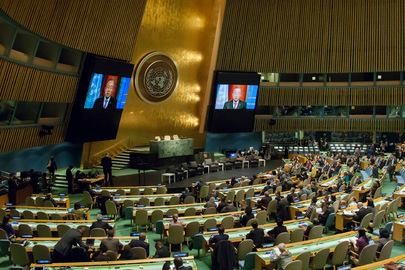 The United Nations Development Program (UNDP), one of the world's biggest anti-poverty body with programs in more than 170 countries convened a high-level meeting to celebrate its 50th anniversary at the UN Headquarters in New York.

Known throughout the world for its partnerships with governments to tackle poverty and inequality, the UNDP works with some of the world's poorest people to improve gender equality, tackle climate change, make farming and fishing more sustainable, and improve health and education.

UNDP, the UN's global development network, was set up in 1966, when one in every three people around the world was living in poverty. As it begins its second half century, the numbers of people in poverty have decreased to around one in eight.

More than 80 government ministers came to New York to join the UN agency in the 50th anniversary celebrations. Their day-long discussions only briefly lingered on celebrating the achievements over the past half a century before turning to the practical matters at hand, how to do even more in the next 50 years, beginning with working towards achieving the UN's 17 Sustainable Development Goals by the year 2030.

"Today's meeting (is) an opportunity to help shape the future of UNDP around the world," said UNDP Administrator Helen Clark, calling for governments to tell UNDP where it could be most helpful in supporting national development efforts.

The approach of ensuring outside development assistance is tailored to the needs and requests of developing countries, rather than imposed from outside, is just one of the ways that development has evolved in recent decades.

"The world has changed immeasurably in (the past 50 years), and UNDP has changed with it," said Clark.
UN Secretary-General Ban Ki-moon in a video message to the meeting, expressed gratitude to all employees of the UN Development Programme for the efforts in improving people's living standards and welfare of those living in unfavorable conditions.


The Secretary-General stressed that the UNDP has always been at the forefront in the fight against poverty and in a short time, achieved the restoration of many countries suffering from crisis