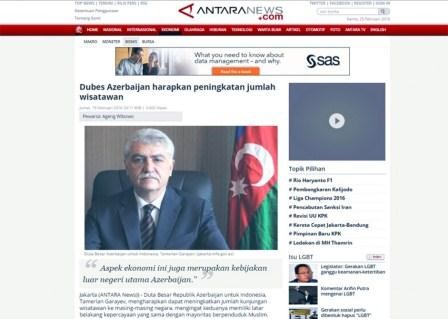 Azerbaijani Ambassador in Jakarta Tamerlan Garayev has hailed his country`s relations with Indonesia as he was interviewed by ANTARA national news agency.

Garayev said he expected an increase in the number of tourists visiting each country, since both countries have the same religious background with a majority Muslim population.

"We are submitting a proposal for consideration in order that Garuda Indonesia can open direct flights to Baku, the capital of Azerbaijan, from Jakarta, Indonesia, or round-trip flight Jakarta - Abu Dhabi -Baku," Garayev said.

Azerbaijan, according to him, has an Islamic background that can attract tourists from Indonesia, such as the mosques and the ancient graveyard of the Sufis.

In addition, Garayev also offers winter travel that is cheaper than the winter holidays in other European countries, saying that even the visa arrangement for Indonesian tourists can be done easily and quickly through the internet online. "

The number of Azerbaijani tourists who was visiting Bali, Indonesia in 2014 was recorded as many as 400 people, it is expected that number could increase.

"The economic aspect is also the main foreign policy of Azerbaijan," Garayev added.

Ambassador Garayev later introduced the "IRS Heritage" a quarterly magazine about culture, history and traditions of Azerbaijani citizens that are translated into Indonesian

language and distributed in Jakarta.

"The interesting thing about the magazine is that the translation into Indonesian is not done in Indonesia, but by citizens of Azerbaijan who are experts in Indonesian language," he said.

To be able to understand the cultures of each other, he states, Azerbaijan has also introduced Indonesian language at the Azerbaijan University of Language since six years ago.

Moreover, the Multiculturalism Azerbaijan subject has also been launched at the University of Gadjah Mada, Yogyakarta, which is supported by the Baku International Center of Multiculturalism with the Azerbaijani lecturer Habib Zarbaliyev.

According to Garayev, the total trade turnover between the two countries was closer to 2.5 billion US dollars in 2014 and the trade target in 2015 is expected to exceed a value of one billion US dollars, taking into account the world oil prices nowadays.

The trade between Azerbaijan and Indonesia is mostly related to the energy sector, considering that Azerbaijan is the second largest supplier of crude oil to Indonesia after Saudi Arabia.