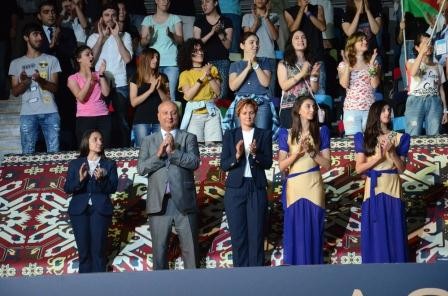 A ceremony to award the winners of the all-around individual and group competitions of the FIG World Cup Final in Rhythmic Gymnastics was held at the National Gymnastics Arena in Baku July 23.

AGF’s special prize – the AGF Trophy – was also awarded for the best performance and the highest score.

Among the gymnasts participating in individual competitions, Russian athlete Yana Kudryavtseva was awarded this prize. Among the group teams, this prize went to the Russian national team.

Among the gymnasts participating in individual competitions, Russian athlete Margarita Mamun was awarded the FIG cup.

Among the group teams, the FIG cup went to the Russian national team.