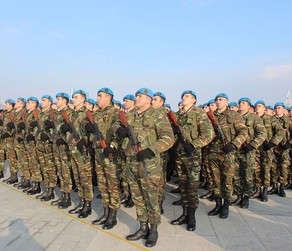 The representatives of Azerbaijani Armed Forces are taking part in international events.

According to the information of Ministry of Defense, annual conference of the heads of Partnership training and education center 29 to 4 March in Tirana (Albania from February), studied practices Staff Officer Course in Kunqsanqen city (Sweden), the first meeting of the Working Group on Operational Capabilities Concept in Ramstayn city (Federal Republic of Germany), the development seminar on language test from February 29 until March 18 in Garmisch-Partenkirchen (Germany), armed conflict in courses Ankara (Turkey) from 11 February 29 until March has being held.

Representatives of the Azerbaijani Armed Forces attend in these events.