"We have built good cooperation with Azerbaijan" 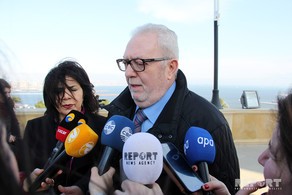 President of the Parliamentary Assembly of the Council of Europe (PACE) Pedro Agramunt told reporters on an official visit to Baku.

He noted that during the visit the sides will discuss ways to further strengthen this cooperation, not only within the framework of PACE, but also in other structures of the Council of Europe including Venice Commission, the General Secretariat, etc.

P.Agramunt said that during the visit he has already held meetings with representatives of NGOs, lawyers, human rights activists, today a little later, he plans to hold meetings in Milli Majlis.