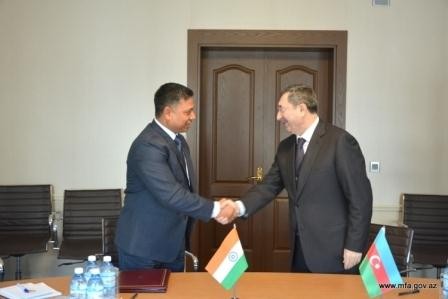 Khalafov highlighted the development of cooperation between Azerbaijan and India in the political, economic, cultural, humanitarian and other fields, expressing confidence that the inter-governmental commission’s meeting scheduled for April 2016 will contribute to further development of bilateral relations.

Stressing the importance of the development of parliamentary diplomacy, Khalafov praised the establishment of the India-Azerbaijan inter-parliamentary friendship group.

He also informed about the East-West Transport Corridor that will further facilitate cargo transportation from Southeast Asia to Europe, as well as the Baku-Tbilisi-Kars railway to be commissioned soon, adding that the countries situated along the Silk Road show a special interest in the [BTK].