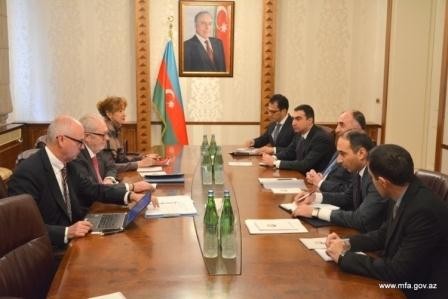 Changing the internationally recognized borders of states by using force are unacceptable and each country has a sovereign right to include such a sensitive issue as the violation of territorial integrity on the agenda of international organizations, Azerbaijan’s Foreign Minister Elmar Mammadyarov said.

He made the remarks during the meeting with PACE President Pedro Agramunt on March 1.

During the meeting, the sides discussed prospects for developing the cooperation between Azerbaijan and PACE, stressing the importance of expanding ties through constructive dialogue and mutual understanding.

They also exchanged views on the negotiations process mediated by the OSCE Minsk Group.

The co-chairs of the Minsk Group and the entire international community have already recognized the unacceptability of the status quo in the Armenian-Azerbaijani conflict, Mammadyarov said, noting that in order to achieve progress in the settlement of the conflict, Armenian armed forces should withdraw from the occupied territories of Azerbaijan as required by the UN Security Council resolutions.

The Azerbaijani FM also urged international organizations to pay special attention to the violation of rights of over one million Azerbaijani refugees and internally displaced persons.

Underlining the importance of parliamentary diplomacy, Mammadyarov said that Azerbaijan is interested in cooperation in this field.

PACE President Pedro Agramunt, in his turn, hailed the successful cooperation between PACE and Azerbaijan and highlighted the prospects for developing this cooperation.

The sides also exchanged views on regional and international issues of mutual interest.