The US ambassador in Sumgait 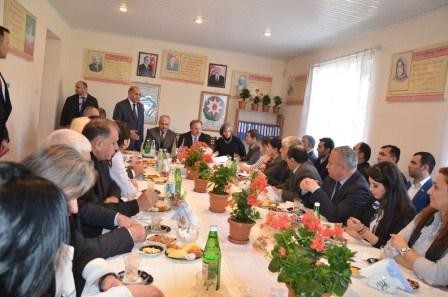 US Ambassador Robert Sekuta visited to Sumgait on March 2.

City Executive Power Zakir Farajov informed about the history, socio-cultural and economic development of Sumgait during meeting. Then a US diplomat got acquainted with the paper and cardboard factory, the butter factory operating under "Azersun Industrial Park" in Sumgait.

The building of the school was built by International Humanitarian Organization of "the hope of the world" in 2004. Deputy Chairman of the State Committee for Refugees and IDPs Fuad Huseynov informed about it. He attended an English lesson and talked with students.

R.Sekuta met with representatives of the local public in the assembly hall of the school. The OSCE Minsk group was not effective on Nagorno Karabakh conflict settlement. Invader Armenia and occupied Azerbaijan have the same approach. Internally displaced persons informed about it.

American diplomat was familiarized with construction of the plant in Sumgait Chemical Industry Park "SOCAR-Polymer". Two companies will be built- polypropylene and polyethylene plants in 30 hectares of land. Both of plants will be commissioned in 2018.