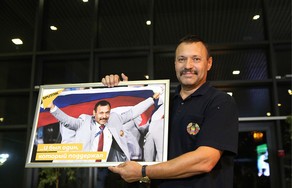 An employee of the Ministry of Sport and Tourism of Belarus, who carried the Russian flag at the opening of the Paralympic Games in Rio de Janeiro, will given an apartment. Spokesman for the Russian Foreign Ministry Maria Zakharova wrote on Facebook on October 2.

According to her, she was asked by her friend with a request to listen to his friend. He said he was so enraptured by Fomochkin and decided to give the apartment to Belarusian and asked Zakharova for assistance.

"Iwill not tell everything. I can only say the apartment is real, in ready home, i have personally checked. And who is the mysterious Count of Monte Cristo, and how our Belarusian hero will react to such a gift, you will find out tomorrow", she wrote.

According to M. Zakharova, Fomochkin has already arrived in Moscow.

Fomochkin came with the Russian tricolor to the athletes parade during the opening ceremony of the Paralympics on "Maracana" stadium in Rio de Janeiro on the night of 8 September.He carried the flag around the quadrant of the stadium, and then the banner was seized.

IPC suspended the Russian national team to participate in the Paralympics because of suspicions that the athletes involved in doping fraud.