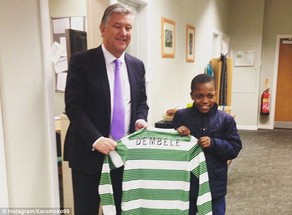 Karamoko Kader Dembele has made his debut for the Celtic Under-20 side - at the age of just 13.

The barely teenage namesake of senior squad striker Moussa replaced Jack Aitchison in the 81st-minute of the Development Squad's 3-1 win over Hearts.

Young Dembele was a shock inclusion in the squad at Cappielow and joined the big boys when he came on for Aitchison - himself only 16 years old.

The opportunity arose when Celtic’s Development Squad was decimated by international call-ups but as the adage goes, if you're good enough you're old enough.

And according to the club's official website "the diminutive playmaker didn’t look out of place".