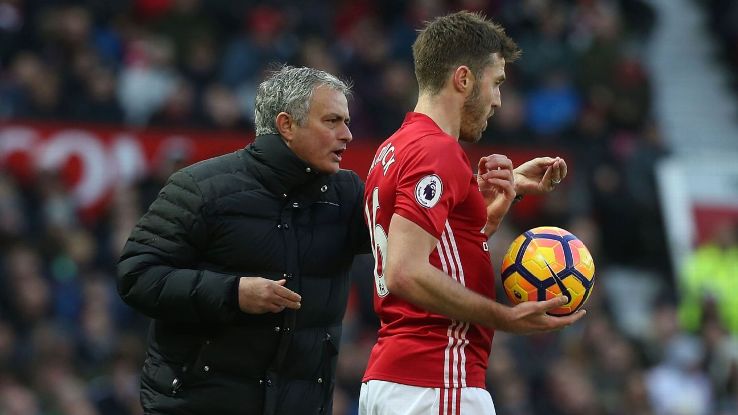 The Red Devils boss thinks that the likes of Arsenal and Liverpool would rather trade places with his side and be fighting for Europa League glory.

Jose Mourinho believes Manchester United's Premier League rivals would rather be in the Europa League final than scrapping over a top-four finish.

Mourinho's side must beat Ajax in Stockholm later this month to gain a Champions League berth for next season via victory in Europe's secondary club competition.

Defeat to Tottenham on Sunday ruled out the prospect of United finishing in the top four domestically, with Liverpool, Manchester City and Arsenal contesting the final two spots as the season enters its final week.

"We, Manchester United, for us it is more important to win titles than to finish top four," Mourinho told reporters.

"So if we can win a third title [including the Community Shield], or like you like to say a second title, if we can do that it would be magnificent for us because we know that it's a big objective.

"We know that if we lose the final we don't play Champions League. We know that.

"But we fight for titles and probably other clubs finishing in the top four, probably they would like to be in our position to try and fight for the title."

Mourinho shrugged off any disappointment surrounding a probable sixth-place finish for his EFL Cup winners – United have not finished lower since David Moyes' shambolic tenure in the 2013-14 season.

Once again, he cited the complications of a lengthy injury list coinciding with a devilishly tough run of Premier League fixtures.

"Because if I have Ashley Young, Luke Shaw, Marcos Rojo, Ibrahimovic, Tim Fosu-Mensah, if I had these guys I can rotate, I can go for every match.

"When I have 14, 15 players, I can't do it. It's as simple as that. It is not possible to do it every three days with the Europa League that is the competition with two more matches.

"With two matches in hand that we had to play later. It is impossible. We never had one occasion to rest, not even to train properly, so it was not a choice.

"We were pushed for that situation and even the draw - I never understood well if it is a draw or if they put the data in the computer - but to finish the season with four matches away from home, Arsenal, Tottenham, Man City - if we were fighting for the title, what a way to fight for the title."

Mourinho added: "I cannot go to Man City or Arsenal and put out five kids at the same time altogether. I cannot lose 5-0 or 6-0.