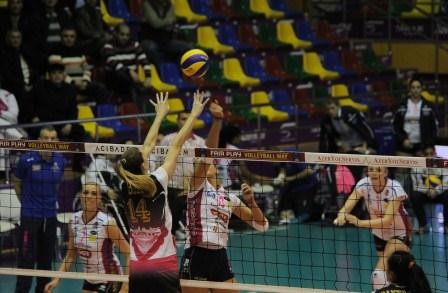 Azeryol BAKU got a step closer to qualifying for the semis of the 2016 CEV Volleyball Cup – Women following their 3-1 home win (25-19, 25-17, 23-25, 25-17) over Italy’s Igor Gorgonzola Novara, according to the website of the European Volleyball Confederation.

The re-match will now follow in two weeks in Italy and determine which team makes it to the penultimate stage of Europe’s second most prestigious club competition.

The first set was a close affair with Azeryol claiming an 8-6 lead at the first technical time-out as both teams seemed to struggle with their blocking system. However, the Italians did not show enough quality also in reception and as a result the first set ended in a fairly compelling 25-19 win for Azeryol.

The second set followed a similar plot with Azeryol being even more dominant this time around as the hosts cruised to a 25-17 win to further cement their leadership in the match.

However, the course of the game changed in the third set where NOVARA showed a far better performance than in the previous stages of the match. They fought for this set with everything they had and they eventually took it home by 25-23.

The fourth set was fairly one-sided and following their 25-17 win, Azeryol could celebrate a well-deserved 3-1 home victory. Anna Stepaniuk paced Azeryol with 20 points as setter Mareen Apitz did well also from the service line and Yelena Parkhomenko stood out at blocking.