Next meeting of AFFA Clubs Committee kicks off 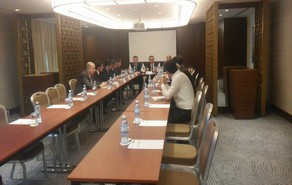 Next meeting of AFFA (Association of Football Federations of Azerbaijan) Clubs Committee (CC) has started.

All 10 clubs, playing at Azerbaijan Premier League, participate in the event hold in Boulevard Hotel.

6 issues will be discussed in the meeting: meeting with members of the Media Committee, discussion regarding non-adoption of the offers of the Clubs Committee by the Executive Committee, clubs' support for U-17 European Championship, preparations for the European Cup, Super Cup match and other issues.