Singer Roya meets with Azerbaijan's U-17 to compete 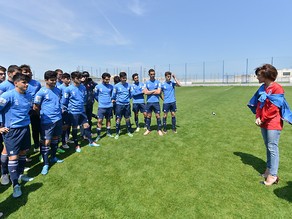 The AFFA (Association of Football Federations of Azerbaijan), the meeting has been held in National Team Training Centre in the AFFA Football Centre in Mardakan settlement of Baku.

The Ambassador of the European Championship, which will start in Baku on May 5, wished success to the team.

Notably, during the championship lasting until May 21, Azerbaijani team will have its first match against Portugal following the inauguration.