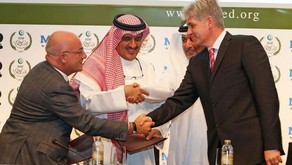 Preparations for the fourth Islamic Solidarity Games (ISG) in Baku from May 12-22, 2017, got off with a solid road trip start, when the event was formally announced at a media conference in Dubai at the Emirates Towers, on Tuesday.

Al Nassar said: "We are proud to confirm the fourth Islamic Solidarity Games (ISG) in Baku, Azerbaijan next year and we are proud to have such a strong city like Baku which has so much of international experience as a sports host. The signing of the agreement with Events Lab and MMC Sportz as exclusive sports marketing partners shows that we are totally proactive and professional in reaching our goals."

"For us, the partnership with ISSF is very prestigious and the joint venture with MMC Sportz brings forward a wealth of expertise in various types of dealings," said Samir Tabbah, Group CEO, Desert Gate Tourism & Events Lab.

Gottschalk, MMC Sportz CEO said: "When we presented the commercial framework for the 2017 chapter, it was well received since it was budget sensitive."

The 57-member Islamic Solidarity Federation (ISSF) will hold the multinational, multi-sport extravaganza where over 5,000 athletes, some of them elite, are expected to participate in the Baku chapter.

Notably, the first event was held in 2005 in Saudi Arabia where the nations of the Organisation of the Islamic Conference took part. Non-Muslim citizens in the member countries are also allowed to take part in the Games.

The second event, originally scheduled to take place in October 2009 in Iran, and later re-scheduled for April 2010, was cancelled. The third edition took place in 2013 in Indonesia.

Forty one nations from the member-list represented at the Games in Palembang three years ago. During the 8th General Assembly of the ISSF in Jeddah, the Baku-2017 Bid Book was presented. The venue was unanimously voted and passed for the fourth chapter to be held in Azerbaijan in 2017.