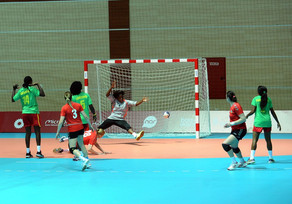 The prime task of the Russian national team at the 2019 World Men’s Handball Championship is to enter the top seven of the finalists and proceed to the qualifications tournament of the 2020 Olympics in Tokyo, Sergei Shishkaryov, the president of the Russian Handball Federation (RHF).

The 2019 World Men’s Handball Championship will be held in six cities of Germany and Denmark between January 9 and 27. The Russian national team’s competitors in the group stage are the national squads from France, Germany, Serbia, Brazil and South Korea.

"The team’s aim for the world championship is to accomplish the minimum task, which is to win the spot in the Olympic qualifiers, or, in other words, to finish in the top seven," Shishkaryov said. "The maximum task is to finish above the 7th place and fight for the medals."

"Our national team is a mixture of experience, skills, young talents, and each player is ambitious," he said. "Our group at the world championship has been branded as the ‘Group of Death.’ We must clear the group stage defeating our opponents and keep fighting for the medals."

"We need to prove to the world that the Russian national team is capable of laying claims to keep highest places in the global and European ranking lists," Shishkaryov added.

The 2020 Summer Olympic Games will be held in Tokyo’s Japan between July 24 and August 9 and will see a total of 339 sets of medals to be contested in 33 sports (50 disciplines).