Football fans: Henrikh Mkhitaryan would be safe in Baku 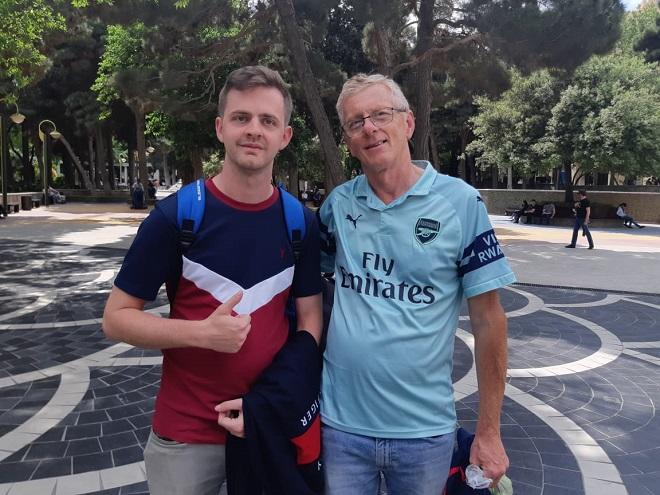 "I don’t know why he did this. This is a purely political issue. If you’re not from Azerbaijan or Armenia, you don’t understand what is happening. Maybe he could come here. It’s difficult for us, the British, to understand the policy of Azerbaijan and Armenia, we know very little about it. It’s a pity that he didn’t come. I think he would be safe here," - the fan explained.

According to Richard Scales, safety was very well ensured in Baku.

"There were a lot of policemen. Everything was well organized. Some Arsenal fans were aggressive when Chelsea scored their third goal. But, honestly, I didn’t see any fights. In general, the atmosphere was very positive. We talked to Chelsea fans," - he said.

Another fan, Chris Scales, stressed that both the fans who flew to Baku and Baku citizens were friendly.

"If we couldn’t find something in the city, any direction, Azerbaijanis always helped us," - he said.

Richard Scales said that they met people from China, Japan, the United Arab Emirates in Baku. "That is, from countries that are far from Azerbaijan. This is an opportunity to come to watch the game. So it's not only the English fans who had to take a long way. A lot of people came from Israel," - he added.

In addition, Richard Scales highly appreciated the atmosphere in Baku. "There were stunning fans cheering on so loudly. I think Arsenal was very nervous because they wanted to get into the Champions League. I’m upset that we couldn’t win, but I liked the game, the final, Baku, which is a very beautiful city. It's my first time in Baku. All the people are friendly here. It was a great trip. The result of the match is sad though," - the fan noted.

Chris Scales said he liked the Baku Olympic Stadium very much. "It's a very good stadium. It was nice to see people from all over the world come here for the game. That's why the atmosphere was so great. But I am also upset about the result," - he said.

Richard Scales noted the unusual stadium, where fans are very far from the pitch. "In England, football stadiums are not like that, so it was very unusual. The distance between the fans and the players is very large. But, in fact, it didn’t really make a difference. Everything was just different. You are right near the pitch at English stadiums. But it's fine," - he stressed.

The final match of the UEFA Europa League season 2018-2019 between Chelsea and Arsenal ended with victory for the "blue" ones with a score of 4:1. It was held at the Baku Olympic Stadium yesterday evening.