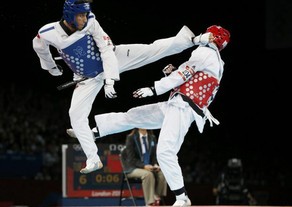 Another Azerbaijani taekwondo fighter reached a final at the European championship in Montreux, Switzerland. It is Beigi Harceqani.

Legioner in the weight category of 80 kg started to struggle from 1/8 finals.

Final opponent of Olympianin will be Yunus Sari from Turkey.

In the same weight category Ramin Azizov won Slovakian David Sayko 10:1 and then lost to Lutalo Muhammad in 1/8 finals.