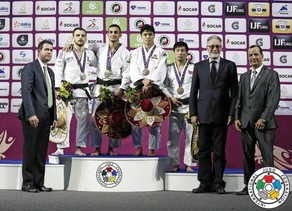 It was, Safarov defeated Turkish athlete Bekir Ozlu in 60 kg at 1/4 finals. In the semifinals, he defeated the French judoka Walide Hyara and reached the final, where he had decisive fight with Vincent Limar. Defeating the competor, Safarov won the gold medal.

Nijat Shikhalizade won the bronze medal in the weight category of 66 kg.