Funeral for Muhammad Ali will start in the US today 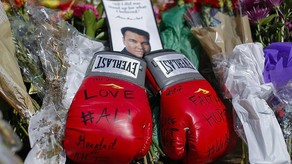 Muhammad Ali crafted the plan for his final tribute years ago, long before he died. On Friday, his family will honor him just like he planned, with a global celebration in his hometown.

According to the Anadolu, a procession will carry his body down an avenue in Louisville that bears his name, through his boyhood neighborhood and down Broadway, the scene of the parade that honored the brash young man, then known as Cassius Clay, for his gold medal at the 1960 Olympics.

A day after Ali died at age 74 from complications of Parkinson's disease, a family spokesman outlined plans for Ali's funeral as people from Manila to Louisville to his adopted home of Arizona mourned the boxing great's passing.

Family members will accompany Ali's remains to Louisville within the next two days. A private funeral will be held Thursday.

After the Friday procession, a memorial service open to the public will be held at the KFC YUM! Center.

The ceremony will be led by an imam in the Muslim tradition but include representatives of other faiths. Utah Senator Orrin Hatch will represent Mormons.