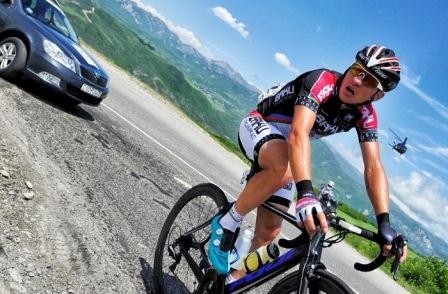 Cyclist of the Azerbaijani Synergy Baku Cycling Project Kirill Pozdnyakov ranked second on the Queen Stage of the Tour of Slovakia.

After the difficult mountain stage, the Russian riding for the Synergy Baku Cycling Project has moved up to third overall.

Pozdnyakov attacked on the penultimate climb and joined a lead group, with 15 km to go. The group stayed away until the end.

“The team helped me a lot during the stage,” Pozdnyakov said. “Maksym Averin and Samir Jabrayilov made good tempo on the climbs. On the second to last climb I attacked with (eventual winner) Mauro Finetto and we held the gap until the end.”

“The final climb wasn’t hard enough to make a difference,” he added. “On the sprint I was sitting in third position, but the guy before me left a gap. I went around him but it was too far up to Finetto.”

With three more stages to go, two of them with climbs, Pozdnyakov is sitting comfortably in third place overall, nine seconds down.

Friday’s stage three is the longest of the race, at 170.1km from Strbske Pleso to Zuberec. There are four ranked climbs, with two coming in the first 40 km.

The tour will last on June 12.