Name of a bearer of Azerbaijani flag unveiled 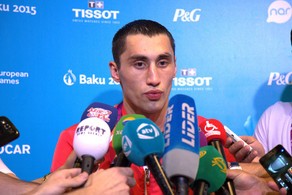 Boxer Teymur Mammadov may become a bearer of the Azerbaijani national team at Rio de Janeiro Summer Olympics in 2016.

According to the minister, it could happen in case of a victory of T.Mammadov in 1/4 finals at the forthcoming in Baku World Qualifier Tournament winning a license to the Olympic Games: "Otherwise, the final decision regarding the bearer of Azerbaijani flag will be adopted by the National Olympic Committee."