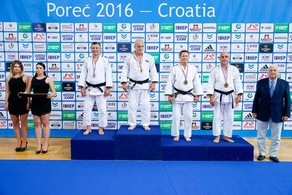 On the first day of the championship, Azerbaijani national team won a gold medal.

Farhad Rajabli (90 kg) in the first match defeated Russian Viktor Nikitin, then French Herve Piyo and Manuel Pajaro. In the finals after beating Ukraine's Igor Knısa he reached the highest step of the podium.