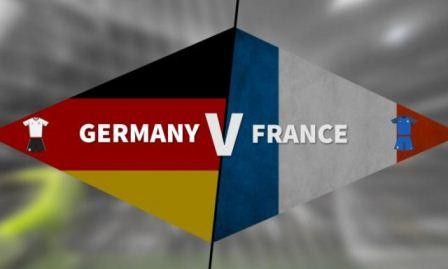 France must win a competitive match against Germany for the first time since 1958 to book a spot in the final of Euro 2016, where they will face Portugal following their 2-0 victory over Wales last night.

The hosts made light work of one of the tournament`s surprise packages Iceland, winning 5-2 in Sunday`s quarter-final to reach the last four. But now Didier Deschamps`s men most negotiate a route past the world champions.

Their last meeting, at the Stade de France in November, was rocked by terrorists as three suicide bombers targeted the stadium, killing one outside the ground after failing to gain entry.

The match continued to its conclusion, with France winning 2-0, as talk turned to security ahead this summer`s tournament.

Joachim Löw`s men were the victors in the meeting before that at the quarter-final stage of the 2014 World Cup, but what else is there to know ahead of Thursday`s match?

France face Germany at the Stade Velodrome in Marseille on Thursday July 7, with kick-off scheduled for 8pm UK time.

France could welcome back both Adil Rami and N`Golo Kante after the suspended duo sat out of the 5-2 victory over Iceland on Sunday.

Both have now served their bans and are in contention, while Laurent Koscielny and Olivier Giroud - both one booking from a ban - were sacrificed early against Iceland to ensure they can feature in the semi.

Germany, meanwhile, will be without Mats Hummels for their cruch clash against hosts France after a booking against Italy.

Mario Gomez is out of the tournament with injury, while both Bastian Schweinsteiger and Sami Khedira are major doubts with knocks.