"I did not mean to hurt Ronaldo" 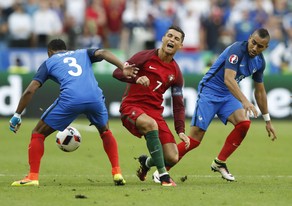 French national team footballer Dimitri Payet insisted there was no malice in his tackle that forced Cristiano Ronaldo out of Sunday's Euro 2016 final.

'No, it was a challenge, that's all, period. I regained the possession and if I hurt him it was not intentional. It's not in my nature to be a bad guy on the pitch. There is no question about it', 29-year-old midfielder said.

Notably, inevitably given Ronaldo’s huge fanbase, the culprit of the tackle has taken a lot of heat on social networks step forward Dimitri Payet. The West Ham man recceived all sorts of abuse from Portugal and Ronaldo fans, who don’t seem to care whether Payet got the ball or not.