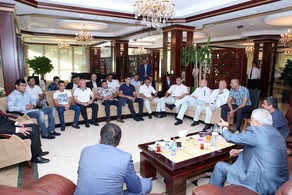 President of Azerbaijan Judo Federation Rovnag Abdullayev has met with members of national judo team, which will participate in Rio 2016 Olympics, and the coaching staff.

It was told in the press service of the Federation.

Rovnag Abdullayev said that attention by Azerbaijani President Ilham Aliyev towards sport and the Olympic movement has been repeatedly appreciated by leadership of the International Olympic Committee and international sports organizations. The federation's president expressed his hope in decent representation of Azerbaijan in Rio Olympics by 6 judokas. Vice Presidents of Azerbaijan Judo Federation Mikayil Ismayilov, Sadig Sadigov and Elnur Mammadli stressed that the first team took part at all prestigious international competitions during 9 months and won medals at the European Championship, Grand Slam and Grand Prix tournaments.

Vice President Sadig Sadigov noted that during this period, national judo team training camps were highly organized in various countries of the world and in the republic. Head coach Peter Seisenbacher and team captain Elkhan Mammadov expresed their gratitude to the leadership of the federation for attention. They were photographed at the end of the meeting.