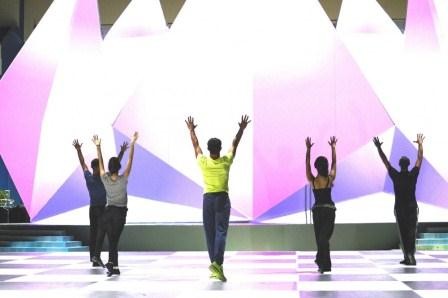 Dry runs of the opening ceremony of the 42nd World Chess Olympiad are now under way. The press service of the Baku Chess Olympiad reports that a number of Azerbaijan’s renowned art figures are involved in the organization of the ceremony to be held at the National Gymnastics Arena. Costumes and music to be used during the ceremony have already been approved. The official partner of the Baku Chess Olympiad Operating Committee, “Amapola Exclusive Events”, has started the installation of technical equipment and decorations for the ceremony. The ceremony is expected to last for one hour and feature some aspects of the chess tradition in Azerbaijan, including elements of national culture.

Speaking about preparations for the ceremony, the choreographer of the ceremony, People’s Artist Tarana Muradova, said: “I am very delighted to be the choreographer of the opening ceremony of the 42nd World Chess Olympiad. We are working together with a well-known director from Ukraine, Viktor Nikolayevich, and Azerbaijan’s Merited Artist Rashad Hashimov. We have also written the script of the ceremony together. The opening ceremony will be magnificent. Azerbaijan has a reputation for hosting prestigious international events at a good level. We have no doubt that the Baku Chess Olympiad will also be organized at the top level. The opening ceremony will feature the history of chess in Azerbaijan.”

The designer of the opening ceremony, Viktor Nikolayevich, said the opening ceremony would be unforgettable. “The spectators will see a brilliant show. We can call it a fairly-tale of chess. We have created some interesting characters. I would not like to reveal all the secrets at this stage, but I am sure people will enjoy it. We have been practicing for about 10 days now. The final dry runs are now under way. Azerbaijan has a lot of experience in hosting prestigious international events. The Baku Chess Olympiad and the opening ceremony will be held at the highest level. I am confident that the ceremony will be absolutely unforgettable.”

The music designer of the opening ceremony and director of “Rast” music band, Merited Artist of the Republic of Azerbaijan Rashad Hashimov, said he had composed music exclusively for the opening ceremony. “Chess is an elite intellectual sport. The world’s strongest chess players will come to Azerbaijan. We have tried to compose music in a genre close to classical for the opening ceremony. Music of our great composers Fikret Amirov and Gara Garayev will also be used. With very little time left for the show, we are sure that the efforts of the entire team will yield fruit. There is a spectacular show in store for the viewers,” Hashimov said.

The representative of "Amapola Exclusive Events", Safar Aslanov, said the ceremony had been organized in a unique fashion. “The Olympiad will be joined by more than 180 countries. Most of them will start their familiarization with Azerbaijan in this Arena. The ceremony will feature the history of chess and elements of Azerbaijani culture. We have tried to blend modern technology with live performance of our traditional music. The team includes about 400 people. Folk and classical dances will also be on display. The parade of flags will be accompanied by 177 performers of the Naghara. The one-hour event will feature Azerbaijani culture and classical ornaments,” he said.

The opening ceremony of the 42nd World Chess Olympiad will be held at the National Gymnastics Arena on 1 September. It will start at 19:00.