Leader of former al-Qaeda group is killed in air strike 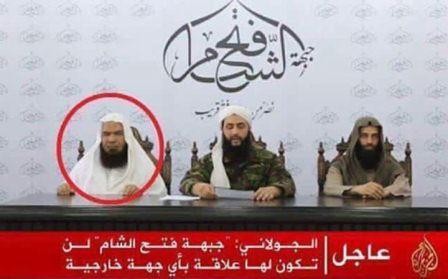 A senior leader of a key Islamist group in Syria has been killed in a coalition airstrike near Idlib, the group confirmed on Monday after the Pentagon announced that it had targeted him.

Ahmed Salameh Mabrouk, an Egyptian also known by his nom de guerre Abu Faraj al-Misri "was martyred after a coalition air strike in the west of Idlib province," Jabhat Fateh al-Sham said in a statement on the Telegram app.

Born in 1956 in the suburbs of Cairo, Mabrouk was known as a veteran al-Qaeda leader and a Jabhat Fateh al-Sham (Front of the Conquest of Syria) commander.

Mabrouk was “kidnapped” by the CIA in Baku, Azerbaijan in 1998, Lawrence Wright recounts in Pulitzer prize winning The Looming Tower.

According to Dan Coleman, a former FBI agent who worked for the CIA’s Osama bin Laden unit, Mabrouk’s laptop contained key details about al-Qaeda’s network. He famously called it the “Rosetta Stone of al Qaeda.”

Mabrouk was then held in an Egyptian prison for years. He was released some time after the uprisings that overthrew President Hosni Mubarak’s government, the Long War Journal reports.

Pentagon spokesman Peter Cook confirmed that a US strike near Idlib had targeted Mabrouk, describing him as "one of al-Qaeda in Syria's most senior leaders and a legacy al-Qaeda terrorist who previously had ties to Osama bin Laden."

However, officials are "still assessing the results" to determine whether he had in fact been killed in the air raid, Mr Cook stressed.

"His death, if confirmed, would disrupt and degrade coordination among senior AQ leaders and extremists," he said in a statement.

"The United States military will continue to target al-Qaeda leaders to disrupt their operations and counter the threat posed by this terrorist group," he added.

A main rival of the Islamic State (also known as Isil), the jihadist group said it wanted to distance itself as a target of foreign air strikes and that it would unify ranks with other mainstream fighters in Syria.

In footage of the announcement of the separation from al-Qaeda, Mabrouk was sitting next to Abu Mohamad al-Jolani, Jabhat Fateh al-Sham's leader.

US military officials do not consider Fateh al-Sham to have truly broken with the global jihadist network founded by bin Laden.

"We are aware of al-Nusra's announced name change. The individuals that are there are still Nusra to us," Pentagon spokesman Navy Captain Jeff Davis said.

Middle East analyst Charles Lister said that Mabrouk's presence in the video was an indication that al-Qaeda would still play a crucial role in the re-branded group.

"Al-Qaeda is playing a critically important role in shaping this development and their thinking and strategising will remain crucial for this new Jabhat Fateh al-Sham movement," Mr Lister said.

"It will still oppose the most moderate of opposition groups in Syria; it will still be viciously sectarian, and it will still ultimately seek the establishment of an Islamic emirate in Syria and the potential launching of external attacks on the West.