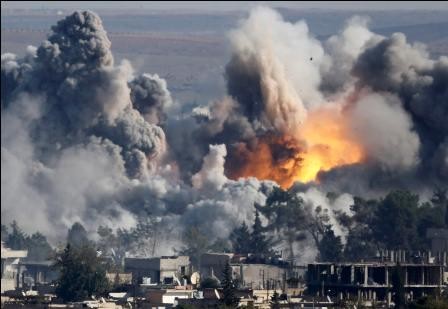 Air strikes on an Islamic State-controlled village with a mainly Kurdish population near Syria's northern border with Turkey killed and injured dozens on Wednesday, the Syrian Observatory for Human Rights said.

The group has so far documented the deaths of 13 civilians but said the death toll is likely to rise as there are serious injuries among the roughly 60 casualties.

Both the Turkish military and the U.S.-led anti-Islamic State international coalition have been launching air strikes in that region, but it was not clear which nation's aircraft carried out the strikes, the war monitor said.

Turkish military intervention to clear Islamic State from the Syrian side of the Turkish border aims to eventually oust the hard-line Sunni Muslim militants from the town of al Bab, 16 km (10 miles) south-east of the village.

Turkey, which is fighting a Kurdish insurgency at home, is working with western-backed rebels in the push, hoping also to stem the expansion of the Syrian Kurdish YPG militia into areas of Syria formerly controlled by Islamic state along the border.

The Syrian military, supported by Russian air power, is also waging a separate campaign against Islamic State across Syria.