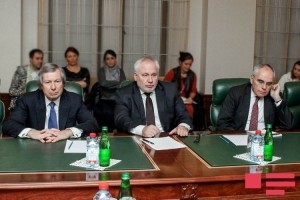 OSCE Minsk Group co-chairs James Warlick (US), Pierre Andrieu (France) and Igor Popov (Russia) will arrive in Azerbaijan later today as part of their trip to the region.

The co-chairs will discuss the settlement process of the Nagorno-Karabakh conflict with Azerbaijani officials.

They are also scheduled to visit Armenia and Azerbaijan’s Nagorno-Karabakh region occupied by Armenia.