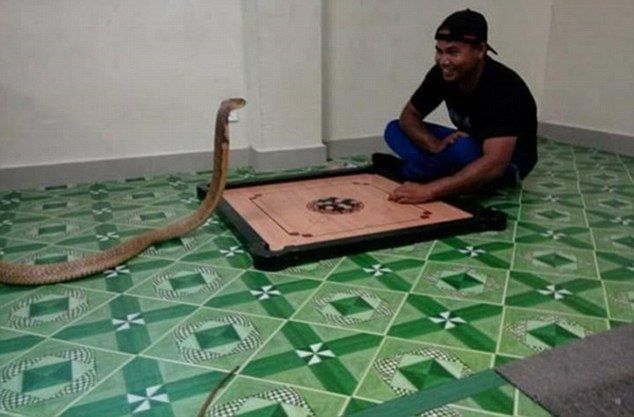 A man has married his pet snake because he believes his dead girlfriend came back to life as the cobra.

The snake was spotted by the man in South East Asia, who said it bore a 'striking resemblance' to his former lover.

He and the 10ft serpent now spend every day together watching TV, sharing romantic picnics by the lake, playing board games and going to the gym as a couple.

The unidentified husband is understood to have taken the Buddhist theory that people are reincarnated as animals.
He lost his girlfriend five years ago, but photos have shown he and his new wife are very happy together.
Warranan Sarasalin from Kanchanaburi in Thailand, sent the photos in and said he looks after it very well and that 'true love is true love'.

He told: 'He never stays away from the snake.

'He takes it everywhere he goes or even while he's sleeping.'

The besotted man is well known in the area for his relationship with the snake, and has ignored all warnings of the dangers of living with a 3 meters long cobra.