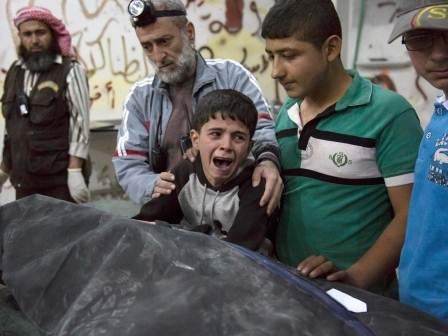 Shelling by Syrian rebels killed several children at a school in government-held western Aleppo on Thursday, state media and a monitoring group said, just a day after air strikes on a school in a rebel-held village in Idlib, 50km (32 miles) away.

The shells hit two neighborhoods, Syrian state news agency SANA reported: the national school in the Shahaba area, killing three children and wounding more than a dozen others, and the other attack killed three people in Hamdaniya.

The Syrian Observatory for Human Rights, a Britain-based monitor of the five-year-old war, said six children under the age of 16 had been killed in the two attacks, including a baby.

Syria's largest city before the war, Aleppo has been divided between government and opposition sectors for years.

Wednesday's air strikes hit a school in the Haas village in rebel-held Idlib, killing at least 15 school children, an attack that Western countries have blamed on the Syrian military and Russian air force. Moscow has denied involvement.