Airstrikes on Aleppo kill 106 in 3 days 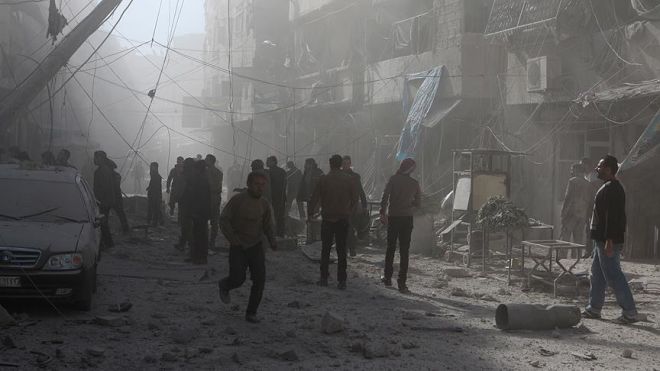 At least 106 people have been killed within the last 72 hours by repeated airstrikes on opposition-held parts of Aleppo, according to sources based in the city.

Najib al-Ansari, an Aleppo-based civil defense official, told Anadolu Agency that at least 12 civilians had been killed Friday morning in raids carried out by Russian and Syrian regime warplanes that targeted the city’s eastern districts.

The latest casualties, he said, bring the total death toll in Aleppo over the past three days to 106, while almost 200 others have reportedly been injured over the same period by persistent bombardments.

According to al-Ansari, regime and Russian warplanes have been consistently striking Aleppo’s opposition-held eastern districts for the past three days.

The official went on to assert that the Syrian regime had dropped barrel bombs -- some of which, he claimed, contained poison gas -- on Aleppo’s Masaken Hanano neighborhood.

Syria has been locked in a devastating civil war since early 2011, when the Assad regime cracked down on pro-democracy protests -- which erupted as part of the "Arab Spring" uprisings -- with unexpected ferocity.

Since then, hundreds of thousands of people are believed to have been killed and millions more displaced by the conflict.

In Sept. 30 of last year, Russia began an extensive air campaign in Syria with the aim of propping up the embattled Assad regime and fighting what it describes as "terrorist groups".