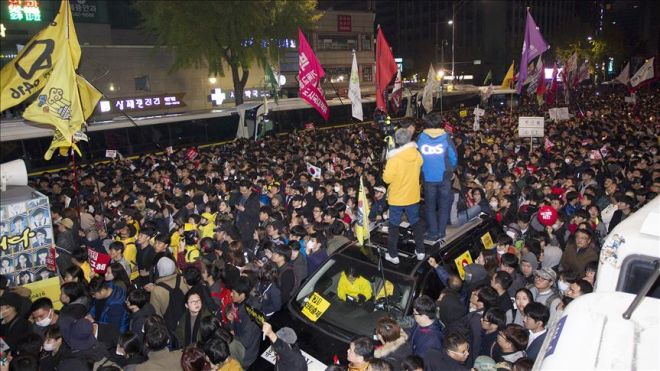 South Korea is witnessing a fourth consecutive weekend of mass protests against President Park Geun-hye, with organizers estimating that those gathering in Seoul could number 500,000 by Saturday evening.

As night began to fall, protesters from all walks of life -- families, students and pensioners in unison -- carried billboards demanding Park's resignation in the rally's epicenter, Gwanghwamun Square.

Fears were raised earlier in the day, when demonstrators convened outside City Hall near a counter-protest by thousands of Park supporters outside Seoul Station.

As of 5 p.m. (0800GMT), however, both sides had refrained from the violence that erupted during a large rally last November.

Protests driven by an overwhelmingly anti-Park sentiment are being orchestrated across the nation in an effort to oust the president, whose Gallup Korea approval rating remained at a record-low five percent this week.

Park could soon be officially named as a suspect by prosecutors investigating a series of alleged abuses including forced donations by conglomerates to nonprofit organizations linked to the president and several of her now former aides.

Sunday is the deadline for state investigators to indict Park's detained secret confidante Choi Soon-sil, portrayed by the media as an invisible hand guiding the president behind the scenes.

The image has been promoted by accusations she abused her ties to Park for financial gain and to ensure benefits for family members.

Local reports have claimed prosecutors are to formalize the president's change in status from witness to suspect when bringing charges against Choi and others connected to the scandal.

Park is in line to become the first sitting South Korean leader to be interrogated next week after she vowed to cooperate with the prosecution.

Following a delay in her planned questioning this week, political opponents have been fueling public anger by accusing Park of seeking to buy time.

"If Park refuses to step down, we will take measures to suspend the constitutionally-guaranteed authority given to the president step by step," Democratic Party head Choo Mi-ae declared Friday.

Choo's implication of opening impeachment proceedings came as she suggested that the government could enforce martial law, a remark condemned as "extremely inappropriate" by the presidential office.