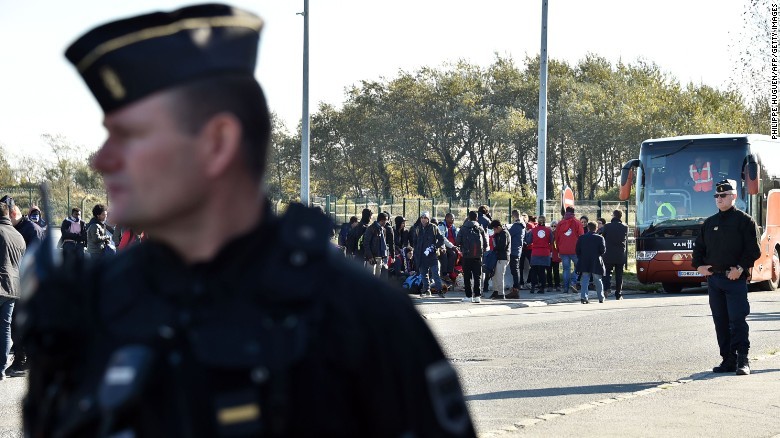 French authorities began moving the last 1,500 minors housed at the country's "Jungle" migrant camp Wednesday, as British officials prepared to assess them for settlement in the UK.

The children had been living in shelters made from converted shipping containers at the camp in the port town of Calais as the tents and shacks around them that once housed thousands of other migrants were demolished over the past week.

The last remaining shelters were pulled down Monday, leaving only the containers standing.

France last week evacuated at least 6,000 migrants from the camp and bussed them to other regions to begin the process of resettlement.

Authorities from the Nord Pas de Calais region told CNN that 650 minors had left by late morning Wednesday and that those remaining were scheduled to leave throughout the day. They will be spread out among 60 processing centers, where officials from the UK Home Office will assess their situation and decide whether they should be settled in Britain.

How do you escape the 'Jungle'?

The UK has agreed to take in a number of unaccompanied minors from the camp, as well as others with family ties in the country.

The Jungle sits some 30 miles across the English Channel from Britain, one of the more desirable destinations for refugees in the region.

As French authorities bussed migrants out of Calais last week to other regions in France, many refused to go, still determined to reach Britain.

On Tuesday evening, a brawl broke out at the Jungle between around 100 Eritrean and Afghan children near a church at the camp, the Calais prefecture told CNN.

The migrants were sent back to their shelter after police intervened. Four people were treated in hospital for minor injuries.

However on Wednesday, Alexandra Simmons, a volunteer aid worker in Calais, said the evacuation was going smoothly and that the children were calm.

Eritrean boys were singing church songs as they waited, she said.

Calais 'Jungle': What you need to know

French authorities vowed to shut down the Jungle migrant camp for months but were shot down several times by court decisions. The camp became a gritty symbol for Europe's migrant crisis, fueled by unrest in the Middle East and political instability in parts of Africa.