Trump had dinner with family and friends at Mar-a-Lago 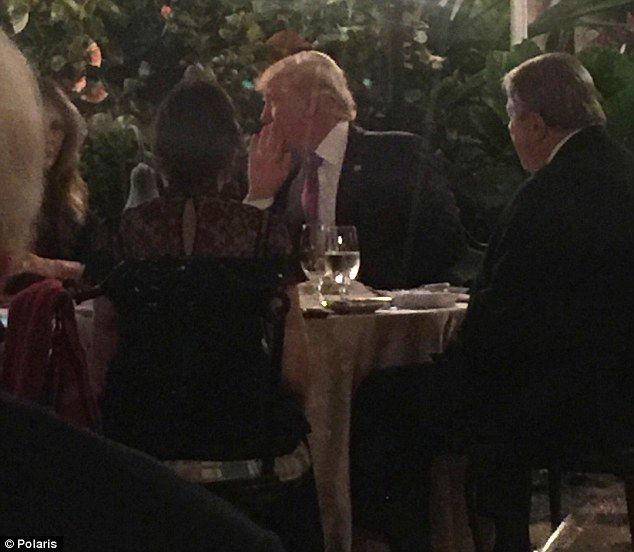 The president-elect is on a brief holiday break from assembling his administration, celebrating Thanksgiving with his family at his swanky retreat.

The president-elect didn't have to worry about getting bumped from a flight on the busy travel rush - he took his own jet. Trump left New York Tuesday night and was expected to return to his home base in Manhattan on Sunday.

His only plans involved 'hopefully eating some turkey,' said Trump transition spokesman Jason Miller. 'I would hope that Thanksgiving dinner would be on the list,' he said, when asked about Trump's plans.

But Trump did take time out from his time out on Wednesday to announce the appointment of Betsy DeVos as Secretary of Education and Nikki Haley as UN Ambassador.

But Miller hadn't ruled out the possibility of a working vacation.

'But as far as meetings and such we haven’t released a full schedule,' he added. 'This will be a time to get together with family and have a brief break in the action.'

He continued: 'But If you know the president-elect, there’s never too long of a break as he wants to get right back at it he knows that we have a finite amount of time to get both the cabinet and the administration put together.'

Vice president-elect Mike Pence plans to fly to Mississippi, where his son Michael Pence, a second lieutenant, is stationed with the Marines.

In 2008, President-elect Barack Obama and his family spent their Thanksgiving in their hometown of Chicago, where they handed out supplies at a food bank at a Catholic Church on the the city's South Side.

The day before, he delivered remarks about the economic crisis engulfing the nation, vowing that 'help is on the way' in this third press briefing of the week.

'There is no doubt that during tough economic times family budgets are going to be pinched," Obama said. 'I think it is important for the American people, though, to have confidence that we've gone through recessions before, we've gone through difficult times before, that my administration intends to get this economy back on track.' He also taped an interview with Barbara Walters that aired the day before Thanksgiving.

Trump has been ensconced in his own properties since winning the election. He has held meetings at Trump Tower and at his golf course in New Jersey, before heading to Mar-a-Lago in Palm TBeach for the holiday.