Why Russia became a Trump card during French debates 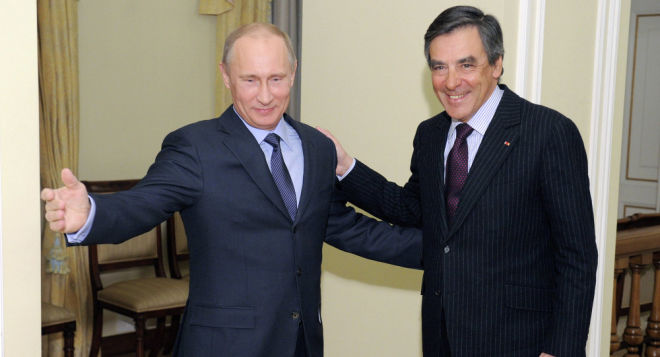 The future of France's relations with Russia dominated the French Republican primary debates between presidential hopefuls Francois Fillon and Alain Juppe, according to Vladimir Ardayev of the International Information Agency Rossiya Segodnya.

Developing Moscow-Paris ties was high on the agenda of the debates of the French Republican primaries between presidential hopefuls Francois Fillon and Alain Juppe, political commentator Vladimir Ardayev of the International Information Agency Rossiya Segodnya said.

On November 24, Fillon and Juppe, both former French Prime Ministers, emerged as the winners of the first round of the Republican primaries with Fillion securing 44 percent of center-right votes, far ahead of his rival. The second and final round of the Republicans primaries between Fillon and Juppe is set for November 27. The first round of presidential elections in France will be held on April 23, 2017.

During the debates, Ardayev said, both Fillon and Alain lashed out at the policy pursued by French President Francois Hollande's administration, including its stance on Russia. A significant difference was that the Fillon's criticism was more rigid, while Juppe's — more moderate.

"The policy of Hollande with regard to Russia is absurd, it pushes Russia to harden, to isolate itself. It is the largest country in the world packed with nuclear weapons and therefore a dangerous country if treated like it has been treated for five years," according to Fillon. He also criticized France's current policy with regard to Syria and called for dialogue with Iran and Russia in that respect.The second republican frontrunner Alain Juppe agreed that France needs to go along a different path than the current one and defend its interests. In particular, he pointed out that he does not want France to be dependent either on Washington or Moscow. At the same time, he said that "I agree with what [presidential hopeful] Francois Fillon said – Russia and we should not become rivals – that it is a big country, our neighbor and we should communicate with [Russian President Vladimir] Putin." In this regard, Ardayev quoted Alexander Orlov, head of the Russian Foreign Ministry's Institute of International Studies, as saying that assessing politicians in terms of their willingness or unwillingness to build relations with Russia is a trend which is now in place not only in France but in many other countries. As an example, Orlov cited the presidential elections in the United States, where Trump's victory became possible largely due to his desire to establish a dialogue with Russia. Orlov was echoed by Dmitry Abzalov, head of the Center for Strategic Communications, who said that both Fillon and Trump managed to benefit from discussing their countries' relations with Russia – a trend that he said has been in place for years. He recalled that during last year's parliamentary elections in Britain, UK Labor Party leader Edward Miliband failed precisely because of his inability to negotiate with the Kremlin, according to Miliband's opponents. "The question is who really is able to negotiate with Russian President Putin who has become a benchmark of the negotiating process for world politicians," according to Abzalov. "In this regard, it is necessary to focus on the ability to conduct a dialogue on an equal basis rather than assess the countries' attitude to Russia. Trump demonstrated this ability, winning the elections, something that is also now being seen in France," he pointed out.

In this sense, Fillon has a good chance of becoming the new French President, Ardayev said, referring to Fillon's reputation in France as a "pro-Russian" politician who favors maintaining a partnership with Moscow and regularly visits Russia.

In particular, Fillon takes part in the St. Petersburg International Economic Forum and the Valdai Discussion Club, also meeting Vladimir Putin who in turn describes him as a professional and decent person, Ardayev concluded.