Fidel Castro's sister will not go to his funeral in Cuba 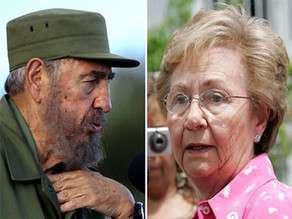 Juanita Castro: 'I do not rejoice of the death of any human'

Fidel Castro's sister Juanita Castro, who is one of four of Castro's sisters and has been living in the U.S. since 1965, said Saturday that she will not be going to his funeral in Cuba. Juanita Castro was supportive of her brothers' efforts to overthrow Fulgencio Batista, but when her brothers insisted on giving away her family's plantation the family was divided. Their mother, Lina Ruz Gonzalez, died in 1963. While working with U.S. intelligence, she remembers Fidel Castro referred to her as a "counterrevolutionary worm" after she sold some of the family's cattle.

On Saturday, Juanita Castro said the death of her brother Friday brought painful wounds to the present. She said she has never returned to the island, and as of Saturday, she didn't have plans to do so. After meeting with her sister Enma in Mexico in 1964, she accused her brothers of turning Cuba into "an enormous prison surrounded by water."

"I have never changed my position -- even though I had to pay a high price for pain and isolation," she said on Saturday. She also said that she feels pain for losing a brother, just like when she mourned the deaths of her brother Ramon and her sister Angelita.

For decades, there were some who in exile did not forgive her surnames were Castro Ruz.

"I do not rejoice of the death of any human being, much less I can do it with someone with my blood and my surnames," she said.