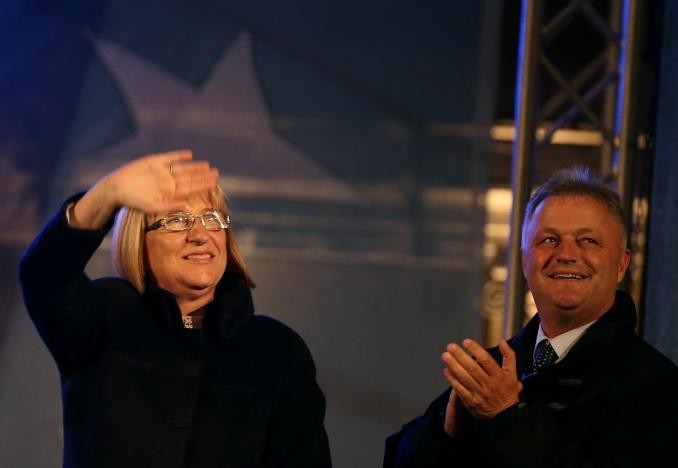 Bulgarians vote in a closely fought presidential election on Sunday that could plunge the Black Sea state into political instability and push it toward closer ties with Russia.

"The vote on Sunday will show whether we have the right to rule the country in the next two years," Prime Minister Boiko Borisov told supporters at the close of the campaign.

That would lead to months of political uncertainty and a further slowdown in reforms, much needed after the collapse of Bulgaria's fourth largest bank and massive anti-corruption protests that helped GERB win parliamentary elections in 2014.

Public disappointment over reform progress eroded support for GERB, while Tsacheva is seen as lacking the charisma of Prime Minister Borisov.

"I will vote for General Radev because he hasn't been involved in dirty political games, so far," said 68-year-old pensioner Dimitar Tashev. "He is not a member of any political party and he deserves a chance."

Nineteen other candidates are also running and most polls show Radev could win a runoff vote on Nov. 13, which has to be held between top two contenders if no one wins an overall majority.

Radev, a former air force commander, has campaigned largely on a promise of closer ties with Moscow, arguing the small European Union state - fully dependent on Russian energy - should hedge its bets when it comes to strategic alliances.

Bulgaria, seen as the Kremlin's most pliable satellite in Soviet times, has long been an anomaly in Europe, a country within EU and NATO structures yet feeling close to Russia.

"Bulgaria is a small country, we do not have resources and it is naive to go against Russia," said Kalin Dragiev, 49, shop owner. "Politicians must accept that Bulgaria badly needs Russia ...I will probably vote for Radev but I still think that Tsacheva is the favorite."

EU sanctions imposed on Moscow over its role in pro-Russian separatist conflict in Ukraine have hurt NATO member Bulgaria financially.

Most power in the country of 7.2 million rests with the prime minister and parliament, but the president leads the armed forces and can veto legislation, sign international treaties and appoint ambassadors.