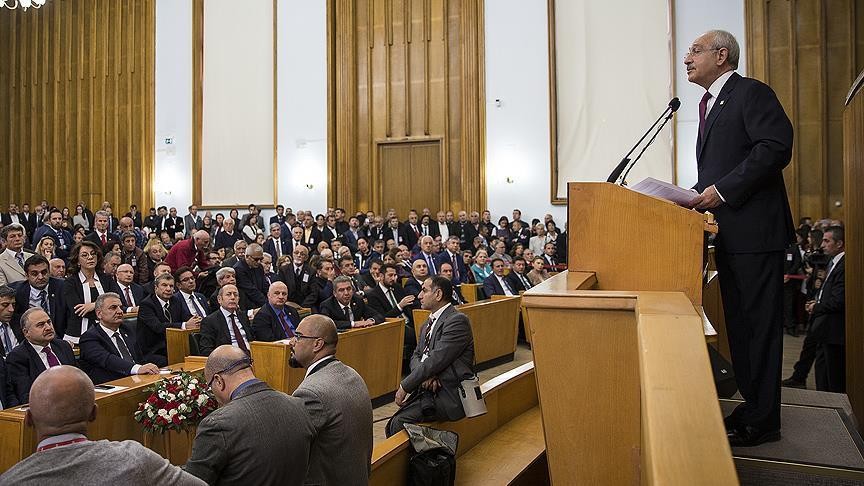 President Recep Tayyip Erdogan on Tuesday launched a criminal complaint against the main opposition Republican People’s Party (CHP) over a statement it released condemning the imprisonment of lawmakers, his lawyer said.

The complaint, filed by Erdogan’s lawyer Huseyin Aydin and seen by Anadolu Agency, accused CHP leader Kemal Kilicdaroglu and parliamentary deputies of making a "heavy insult" against the president.​

It was followed by a similar document from the ruling Justice and Development (AK) Party accusing the CHP figures of insulting the president and provocation. The party’s lawyer, Burhanettin Sevencan, filed a complaint that said the statement was a "clear insult against millions of citizens".

On Monday, the CHP condemned the jailing of Peoples’ Democratic Party (HDP) deputies pending trial on terrorism charges as being "against the constitution". The government has accused the HDP of links to the PKK, which is listed as a terror group by Turkey, the U.S. and EU.

In the complaint lodged with a prosecutor in capital Ankara, a section of the CHP statement was cited as referring to the AK Party, the PKK, the Fetullah Terrorist Organization (FETO) and Daesh, also known by the acronym ISIL.

"The palace that aided and abetted the terrorist organizations FETO, PKK and ISIL... and AKP executives are the biggest threat to our democracy and our country’s security," the complaint said, quoting the CHP statement. "This threat gives our citizens the right to resist democratically." The "palace" is thought to refer to Erdogan’s residence in Ankara.

The statement went on to accuse Erdogan of placing members of FETO, which is said to have organized the July 15 attempted coup, in every level of government.

Erdogan’s complaint added that the CHP had also accused the government of conducting a "palace coup" under the guise of fighting FETO.

In the wake of the coup attempt, Erdogan announced he would drop hundreds of insult complaints, including one against Kilicdaroglu, in a one-time deal as Turkey united in condemning the failed takeover.

However, earlier Tuesday, Erdogan criticized the CHP over its statement and warned: "Everyone must know their limits." He also said it was "unseemly" for politicians to attack the president and the government through statements.

"Those who betray this nation, who are advocating those terrorising [people], must pay the price and give an account," Erdogan said during an inauguration ceremony in Ankara.

Referring to the CHP accusation that the government supported Daesh and other terrorist organizations, he added:

"What kind of main opposition is this? Can there be an understanding like this?"