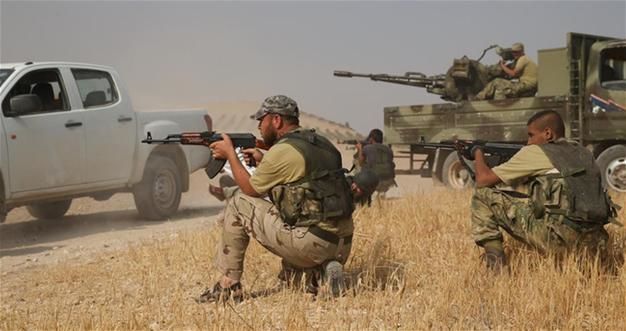 An Iranian-made unmanned drone was used in an attack on a Turkish military camp in northern Syria on Nov. 24, killing four soldiers, a senior Turkish official has told.

Turkey identified the drone as Iranian-made, but it was still not identified whether Hezbollah, the Quds Force or another Shiite militia group in Syria had used it, said the official, who spoke on anonymity.

FM Mevlüt Çavuşoğlu, accompanied by National Intelligence Agency (MİT) Chief Hakan Fidan, paid a surprise visit to Tehran early on Nov. 26, where the Turkish delegation discussed “issues regarding ISIL and counter-terrorism” with Iran and also raised the issue that their findings on the attack on Turkish soldiers in Syria indicated that an Iranian-made unmanned drone was used, the official also said.

However, Çavuşoğlu denied that they discussed the aerial attack in the meeting in Tehran. “Our visit to Tehran had nothing to do with the plane. We went there for a fourth round of discussions that aimed to find ways to precede peace in Syria. We discussed how a cease-fire could be reached, to send humanitarian aid and the necessary steps needed to be taken if there is a cease-fire. But it was not about the drone,” said Cavusoglu.

In a phone call between President Recep Tayyip Erdoğan and Russian President Vladimir Putin on Nov. 26, the second conversation between the two leaders in 26 hours, Russian sources told the Hürriyet Daily News that “both parties have reached a consensus that the attack was carried out by an unmanned drone.”

“It’s not clear whom the drone belongs to,” the source said, adding that both presidents agreed that their military officials would work to the reveal the origins of the aircraft.

Çavuşoğlu told a Lebanese media outlet on Dec. 3 that Russia did not “directly reject” that the regime forces might be responsible for the attack, “but they said the Syrian regime’s aircraft do not have the firepower, and did not possess unmanned aerial vehicles (UAVs) or drones.”

“There are various opinions on this issue and there is a kind of blame game going on. Russia is clearly affirming that they did not do it. But, there are many other elements in the region. After thorough investigations, we will be able to say who the perpetrator was, so now is not a good time to accuse any country,” he stated.

Russian Foreign Minister Sergei Lavrov said on Dec. 1 that neither Syria nor Russia carried out the attack on the Turkish soldiers in northern Syria on Nov. 24.

“In the air strike, assessed to have been carried out by the Syrian regime forces, three of our heroic soldiers were killed and 10 soldiers were wounded, one severely,” the Turkish Armed Forces said in a written statement on Nov. 24 on the attack that occurred near the northern Syrian city of al-Bab.

In an interview with the state-run TRT on late Dec. 1, government spokesperson Numan Kurtulmuş addressed the possibility of an involvement of an unmanned drone in the attack.

“There are records of aircraft flying there at that time… It seems that some groups uncomfortable with the operation [Euphrates Shield], are involved in this incident. It’s known that terrorist groups also have unmanned drones in the air. It will eventually be revealed,” Kurtulmuş said in a press conference on Nov. 28, adding that they had “recordings of aircraft, planes or unmanned drones” in the region.

On Aug. 24, the Turkish Armed Forces launched the Euphrates Shield operation in Syria with Free Syrian Army (FSA) fighters to clear the country’s southern border of both the Islamic State of Iraq and the Levant (ISIL) and the Syrian Kurdish Democratic Union Party (PYD) forces, which Ankara considers as a terrorist organization linked to the outlawed Kurdistan Workers’ Party (PKK).

Ankara-backed FSA fighters have moved within two kilometers of al-Bab with the aim of taking the city from ISIL. The strategic city of al-Bab, meaning “the gate” in Arabic, in the northern Aleppo province, is one of ISIL’s few remaining strongholds and is a route to ISIL-held Raqqa and Syrian rebel-held Idlib.

Regime forces, while continuing their offensive to capture the eastern part of Aleppo from the Syrian opposition groups, is currently advancing toward al-Bab as well.