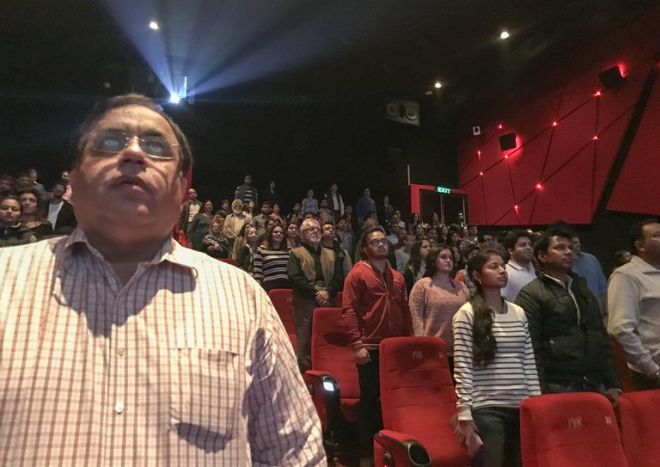 The police in southern India have arrested 12 moviegoers accused of failing to stand during the playing of the national anthem, something required in all of the country’s theaters after a November ruling by India’s Supreme Court.

Police officers in the city of Chennai on Sunday arrested a man, S. Viji, on suspicion of assault and violating the Prevention of Insults to National Honor Act of 1971.

If Viji, who was released on bail, is found to have violated the act, he could face a fine and imprisonment of up to three years.

“We have to see whether they did it intentionally or not,” he said.

The arrests were the first known efforts by the police to enforce compliance with the Supreme Court ruling, which requires movie theaters to play the national anthem before each screening. Patrons, according to the ruling, are required to stand respectfully for the duration of the song unless they are physically unable.

The court said it was necessary that “the citizens of the country realize that they live in a nation and are duty bound to show respect to the national anthem.” The Constitution, it continued, “does not allow any different notion, or the perception of individual rights.”

The ruling on standing for the national anthem, coming in a season of swelling nationalist pride in India, was greeted with enthusiasm by some Indians and derision by others.

The arrest in Chennai followed the decision by a group of people at a theater there to resist the order, said M. Sreela, a law student who was part of the group.

“That was our first movie after the Supreme Court order,” said Sreela, who, like many in India’s south, does not use a surname. “So some of us made a choice not to stand for the national anthem when it was played. So we did not stand up. At the time, nobody objected, not even a glance from anybody.”

During the intermission, she said, another patron grabbed a man in their group by the collar and confronted him about why he had not stood for the anthem. An exchange of insults inside the theater erupted later into a parking-lot brawl.

“They were not paying respect to the national anthem, disturbing others and taking selfies,” said Vijay Kumar, who filed a police complaint against the group that refused to stand. Mr. Kumar said that in the ensuing scuffle, his nose was injured.

“If you don’t respect the national anthem, that’s your business, but at least don’t obstruct others in doing so,” he said.

The police in Chennai said they arrested one man and were seeking two more. Parties on both sides of the brawl filed police complaints against the other, alleging harassment, threats and physical abuse.

Sreela said the group had set out to defy the Supreme Court’s demand, which she described as “a force-fed and micromanaged exhibition of nationalism.”

The dictate to stand for the playing of the anthem, she said in a statement, serves to “enable self-appointed ‘guardians’ of the law and vigilantes all over the country to more aggressively pursue moral policing on their own equal fellow citizens.”

The statement compared the requirement to President-elect Donald J. Trump’s condemnation of flag-burning, and it noted that patrons at the film festival in Thiruvananthapuram “will have to stand up to the anthem even if it is 40 or more times.”