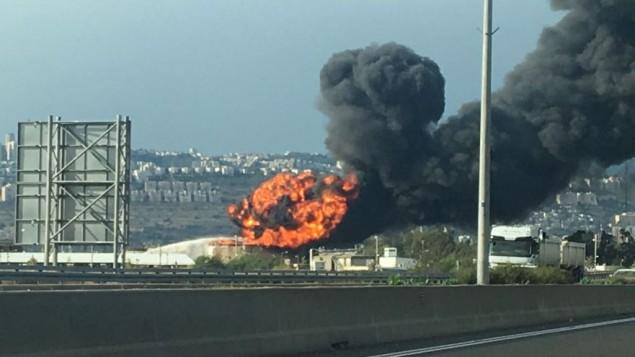 Axar.az reports that, A massive assive gasoline tank at a Haifa refinery caught fire on Sunday, sending bright orange flames and thick black smoke billowing into the air above the large bay city and threatening other installations at a massive industrial complex.

Police briefly closed main arteries near the Haifa industrial zone as dozens of firefighting teams attempted to keep the flames under the control.

“It is a very serious incident. Our main aim at the moment is to stop the fire spreading to other tanks that contain dangerous material,” Haifa fire services spokesman Yoram Levy told the Ynet news site.

Levy said the tank held 1,000 cubic liters of gasoline and more than 40 firefighting teams were being sent to try and contain the blaze.

It was not immediately clear how the fire started.