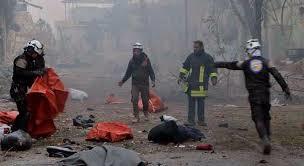 Syrian opposition and Russian delegations mediating peace talks due next week in Kazakh capital of Astana met Friday in Ankara.

Axar.az reports that, the meeting was held in coordination with the Turkish co-guarantor of the cease-fire in Syria, the Syrian opposition's military delegation said in a statement.

According to the statement, the two delegations discussed the structure, the goal, and agenda of the Astana talks.

"The meeting also covered how they would lead to a political solution in Syria in accordance with the UN security council terms of reference, the Geneva communique and resolution 2254," read the statement.

The statement also highlighted that the opposition delegation presented an initiative to the Russian side for observing the cease-fire, which went into effect on Dec. 20, and invited them to check the facts about what is happening in Wadi Barada and other threatened Syrian regions.