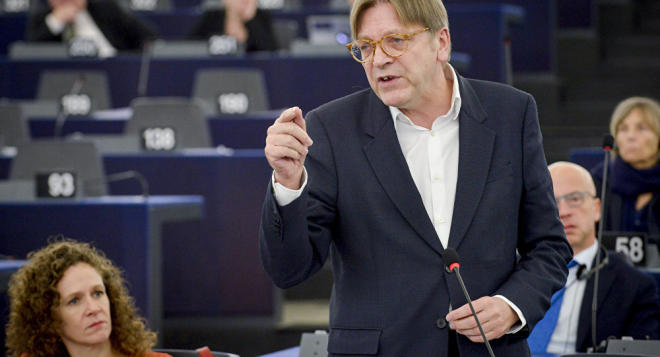 Guy Verhofstadt, the European Parliament's chief Brexit negotiator, stated that US President Donald Trump is the third to the European Union after radical Islamism and Russia.

Axar.az reports that, US President Donald Trump is posing a threat to the European Union along with radical Islamism and Russia, Guy Verhofstadt, the European Parliament's chief Brexit negotiator, said Monday.

"I have just come back from US and my view is that we have a third front [of attack] that is undermining the EU… and that is Donald Trump," Verhofstadt was quoted as saying by The Independent newspaper.

US President Donald Trump speaks during the Inaugural Law Enforcement Officers and First Responders Reception in the Blue Room of the White House in Washington, US, January 22, 2017.

During his speech in London, Verhofstadt called Russia and radical Islamism the first two outside dangers that the European Union was facing.
According to the outlet, Verhofstadt besides warned about the dangers of the nationalism in Europe and across the Atlantic.