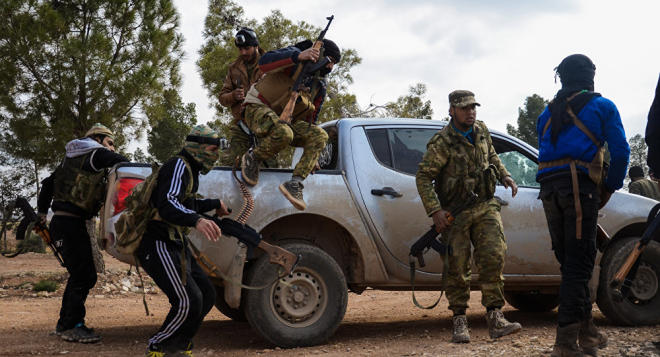 Syrian troops and Turkish forces have formed an unlikely coalition to loosen ISIS’s grip on the terrorist stronghold of al-Bab.

President Bashar al-Assad’s troops have sealed off a key supply route ISIS has used to funnel resources between al-Bab and Daesh positions in Iraq. A slew of airstrikes contributed to the effort, by leaving roads used to transport ISIS militants and supplies in ruins. At least one anti-ISIS commander told hat the anti-ISIS alliance had al-Bab all but entirely encircled, which could pave way for the liberation of the city.

One "narrow" passage remains, the commander said, but the coalition now has most of it "within close firing range."

Turkey and Syria have not always been on the best terms, but a common ally in ISIS has galvanized troops to defeat terrorists in al-Bab. The Syrian Army has fought against the Free Syrian Army backed by Turkey, a NATO member, but Moscow has taken the lead to ensure ISIS is ousted. The coordination of anti-ISIS forces is organized by Moscow, whose efforts have focused on quelling provocations between the two sides. “It’s not a simple job,” Russian parliamentarian and deputy chairman of the Defense and Security Committee Franz Klintsevich said.

"We are working on the Syrian territory and cannot help but pursue such coordination," Klintsevich said. While the effort to organize fighters against the terrorists is filled with complexity, "it brings results," he said.

"It’s clear the [Syrian government] is in a hurry to reach al-Bab," one FSA official said. The Syrian Army is hoping to make more progress to overtake al-Bab than Turkey, as al-Bab is a strategic area for Damascus.

Oleg Glazunov, a professor at the Moscow-based Plekhanov Russian University of Economics, believes Moscow is Ankara’s sole ally in the region. "All the other countries which have an impact on the Syrian conflict have in fact turned away from Ankara," he said, adding that "Turkish President Recep Tayyp Erdogan has no reason to tangle with Russia."

The British-founded Syrian Human Rights Observatory noted on February 2 that ISIS had killed almost a dozen of its own members after in-fighting broke out near al-Bab.