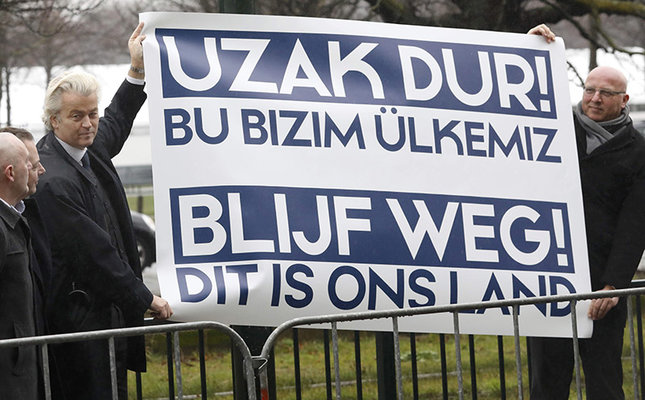 Geert Wilders, the leader of the Dutch anti-Islam Party for Freedom (PVV), held a short demonstration in front of the Turkish embassy in the Hague on Wednesday.

Axar.az reports that Wilders protested Turkey's Foreign Minister Mevlut Chavushoglu's potential visit to the Netherlands, saying he was not welcome in the country to lobby for "yes" votes in a Turkish referendum on constitutional changes.

Amid tight security, the far-right leader stood in front of a banner saying: "Stay Away! This is our country." Wilders added that dual citizens should not have a right to vote in the Netherlands. There was no reaction from within the embassy to the protest.

Wilders' opposition right-wing PVV, which wants to shutter mosques, ban the Quran, quit the European Union and stop Muslim immigration, led opinion polls for most of last year but is now losing ground to the conservative Christian Democrats(CDA) and the far-left Socialists.

It is running second behind the pro-business liberals of Prime Minister Mark Rutte, which along with the CDA has toughened some of its rhetoric on immigration and Islam in the hope of capturing support from Wilders.

On Tuesday, Wilders targeted Socialist leader Emile Roemerin an online campaign advert, after the latter said in a newspaper interview that "fear of Islam is talked into you". The advert responded by listing acts that Islam supposedly punished with death, including apostasy and homosexuality.

The Dutch election is being closely watched in France and Germany, where populist anti-EU and anti-immigration politicians hope to make major gains in national elections this year and deliver upsets that could reshape European politics.

But with Wilders' party now trailing on 14.6 percent in Peilingwijzer's poll of polls behind Rutte's VVD on 16.4 percent, and the Christian Democrats not far behind on 12.1 percent, that prospect may be receding.

The demonstration came the morning after Chavushoghlu addressed a rally in the German city of Hamburg and a week before the Dutch elections in which Wilders is likely to make strong gains.

Several other politicians across the EU have also defended the ban on against Turkish politicians.